Listen to Danielle's music talent on SoundCloud, or via any of he recordings below. And don't forget to check out her latest performances on YouTube. 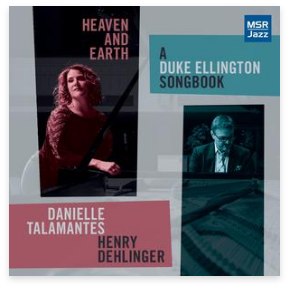 2016 NEW RELEASE: In her sophomore album, Metropolitan Opera Soprano Danielle Talamantes crosses over into the realm of jazz with a recording filled with standard gems and rarely heard masterpieces. With arrangements by Henry Dehlinger, Larry Ham, Caren Levine, and Marvin Mills, this album’s charts were almost exclusively written for this very recording.

Listen to the album on Spotify

DO NOTHIN’ TILL YOU HEAR FROM ME
Duke Ellington / Bob Russell [arr. L. Ham]

Edward Kennedy “Duke” Ellington (1899-1974) is a colossus among American composers of any genre. With a career spanning more than 50 years, he wrote more than one thousand compositions, many of which have become jazz standards as well as precious, irreplaceable gems of the American Songbook. While music historians are won’t to view him as a jazz or big band swing composer, Ellington’s work reaches far beyond. Many musicologists have neglected the extensive body of sacred music that Ellington produced, four of which are presented in this album. In truth, Ellington did not consider himself a jazz or big band writer and performer. In his words, he wrote and played “the natural feelings of a people.”

Ellington conceived his works differently than others of the big band era. Typical arrangements of that period were written for a rhythm section supporting full sections of saxophones, trumpets and trombones with occasional short, improvised solos for contrast. Ellington was like a playwright, producing more script than manuscript, giving voice to leads within his cast of characters, then supporting the tale they wove with other voices within the cast. He chose his players not only for their musical proficiency, but also for their strong personalities. Unlike classic big band, Ellington encouraged his band to express themselves in their music, to let their individual personalities shine through.

The early works were often released as three-minute instrumental singles, the maximum time possible on the single side of a ten-inch 78 RPM record. Words were added later, sometimes several years later, and by a variety of lyricists, adding another sparkling—sometimes startling —dimension to the captivating saga. Whether an instrumental or vocal arrangement, these pieces carry away the listener with Ellington’s uniquely transcendent, supremely evocative, and unequalled style.

I first learned of Danielle and Henry’s Ellington project at a small gathering of musicians, a soiree of sorts, where artists, including some of Danielle’s most promising pupils from her voice studio, were performing works in progress and experimenting with concepts. When asked how she would follow her debut recording, Canciones españolas, Danielle thought aloud, “Possibly something out of the American Songbook…maybe an Ellington collection.” She and Henry had actually been performing two or three Ellington standards for some time, and they performed Larry Ham’s setting of In a Sentimental Mood for the gathering. Henry then improvised accompaniment for sections of a few other standards. It was obvious at that point that this idea was bound to become a beautiful new recording.

This collection captures the genius of Ellington’s compositions and the emotional range of the performers—soprano Danielle Talamantes and pianist Henry Dehlinger. It features settings written by Larry Ham, Caren Levine, Marvin Mills and—in his debut as an arranger—Henry Dehlinger. Danielle and Henry have collaborated extensively on both performance and recording (including Canciones), and Henry wrote his arrangements featured in this album specifically for Danielle’s voice (as did Levine and Mills with their arrangements of Solitude and Heaven, respectively).

The descriptions below include references to original, famous and historically significant versions of these compositions. While the performances in this collection certainly stand on their own, I encourage seeking out additional recordings to hear and compare how others have interpreted Ellington’s “stories.” While listening, ponder the circumstances, the times and places during which these treasures were created, and reflect on the effect on audiences across generations.

During Ellington’s lifetime, a chasm existed—or was, at least, perceived—between the disciplines of “serious music” (as orchestral or classical music was called) and jazz music. In a televised interview in 1966, Leonard Bernstein and Duke Ellington discussed an erosion of this divide. Both were seeing that the aficionados supporting symphony concerts were the same enthusiastic attendees at Ellington performances. Bernstein expressed to Ellington, “You were one of the first people who wrote so-called symphonic jazz. Maybe that’s the difference between us. You wrote symphonic jazz, and I wrote jazz symphonies.” This collection of American music is intelligently conceived, sensitively arranged, and beautifully performed. Duke Ellington once said, quite simply, “If it sounds good, it IS good.” Danielle, Henry and audiences alike can be confident: This collection, indeed, IS good.

Soprano Danielle Talamantes is an international recitalist who made her Carnegie Hall debut in a solo recital in 2007. Since then, she has appeared as a soloist with the National Symphony Orchestra, Baltimore and Nashville Symphony Orchestras, National Philharmonic Chorale and Orchestra, United States Army Chorus, Choralis, Hochschule für Musik Hanns Eisler, Trujillo Symphony Orchestra and Seoul Philharmonic. Talamantes joined the Metropolitan Opera roster in the spring of 2011. In 2015, she made her Metropolitan Opera stage debut as Frasquita in Bizet’s Carmen. She made her Lincoln Center debut at Alice Tully Hall as the soprano soloist in the world premiere of Bob Chilcott’s Requiem and returned to the National Philharmonic in Beethoven’s Choral Symphony and Mozart’s Requiem and Exsultate, jubilate. Other highlights include the soprano lead in the world premiere production of Janice Hamer’s Lost Childhood with the National Philharmonic, Handel’s Messiah with the Phoenix Symphony, Mozart’s Mass in C minor with the City Choir of Washington and Donna Anna in Mozart’s Don Giovanni at Cedar Rapids Opera. She also sings the role of Violetta in La traviata at Cedar Rapids Opera and Finger Lakes Opera, Adina in L’elisir d’amore at Gulf Shore Opera and Mimí in La boheme at St. Petersburg Opera. Talamantes reprises her role as Frasquita and sings the role of Anna in Nabucco at the Metropolitan Opera in the 2016-17 season. Talamantes’ first place competition honors include the Irene Dalis Opera San Jose Competition, Irma M. Cooper Opera Columbus Competition, XII Concurso de Trujillo, NATS Artist Award and Vocal Arts Society Discovery Series competition. She earned her BA from Virginia Tech and MM from Westminster Choir College.
[ www.DanielleTalamantes.com ]

Pianist Henry Dehlinger has appeared on some of the world’s leading stages, including San Francisco’s War Memorial and Performing Arts Center and the White House in Washington, D.C. He has also appeared as featured soloist with The United States Army Chorus, guest performer on Washington’s Embassy Row, and in concert for notable public officials, including the President of the United States and the Prince of Wales. Celebrated for his interpretation of great Spanish piano works, in 2011, Dehlinger released his first album, Evocations of Spain, featuring selections from Isaac Albéniz’s Iberia and Enrique Granados’ Goyescas and 12 Danzas españolas. In 2013, Dehlinger began his artistic collaboration with soprano Danielle Talamantes which resulted in the critically acclaimed Canciones españolas album on MSR Classics. Heaven and Earth, Dehlinger’s second collaboration album with Talamantes, marks his debut as a jazz arranger. Born in San Francisco, Dehlinger started playing the piano at age six and singing at seven. His first mentor was the late conductor and choirmaster William Ballard of the San Francisco Boys Chorus, whom Dehlinger credits for his early success. By the time he was eleven, he had earned a reputation as a prodigious talent, performing with major orchestras under conductors such as Riccardo Chailly and Edo de Waart and at the San Francisco Opera with operatic legends Luciano Pavarotti, Montserrat Caballé and Giorgio Tozzi. At age twelve, Dehlinger became a pupil of renowned piano virtuoso Thomas LaRatta, founder and director of the Crestmont Conservatory of Music, with whom he continues his piano performance studies. Dehlinger graduated from Santa Clara University where he studied history and piano. [ www.HenryDehlinger.com ] 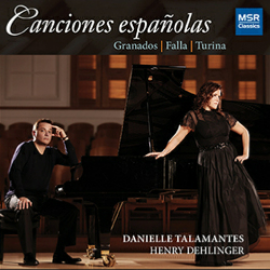 Listen to the album on Spotify